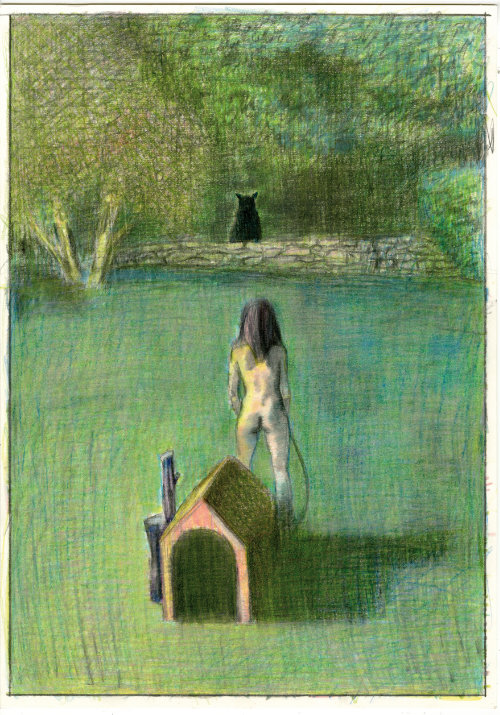 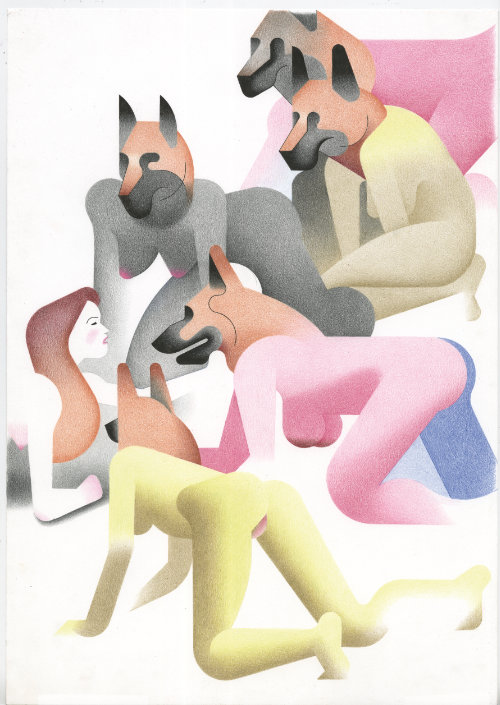 A long-awaited dialogue between one of the greatest cartoonists in the world, from Strasbourg, and a rising star of European illustration recently installed in the capital of Grand Est. 110 drawings of each artist constitute as a dreamlike pictorial correspondence where their obsessions, the course of their life can take the form of very bitten loves. An exhibition for desensitized public.
See also in shadoK : the exhibition of  Mille au Carré.

Born in 1967 in Strasbourg, a graduate of the School of Decorative Arts in Strasbourg, Christian Hincker makes comics as some jazz, composing his own recipes from variations. After having started in journals as different as Fluid Glacial or Lapin, he collaborated with many publishing houses, the press is found in Libération, the Inrockuptibles and The New Yorker. An autobiographical humorous comic, sarcastic parable, reinterpretations of comics or cinema, youth illustration or adult drawing, Blutch has established himself as a world master, attracting many followers. He is currently working on a Tif and Tondu in the course of publication, and after having animated the Alsace stand in Saint Amour de Kervern and Délépine, he played the father of Bruno Podalydès’ Bécassine.

His work has been awarded multiple prizes, including the Grand Prix of the City of Angoulême (FiBD 2009), l’Essentiel 2009, l’Alph’art of humour en 2000, and the International Töpffer Prize (Genève), for Vitesse Moderne en 2002.

Born in 1984 in Saint-Denis (Reunion), graduated from the School of Decorative Arts of Strasbourg (HeAR) in 2009, Anne-Margot Ramstein is an illustrator and cartoonist. published in her debut in the magazine Belles illustrations, she works with her companion Matthias Arégui or solo. Several of her youth albums are published by Editions Albin Michel, she also collaborates with Le Monde, Libération, magazines like Dada, XXI, Le Tigre. Her remarkable style made her the first resident illustrator of the Académie de France in Rome – Villa Medici in 2015 and 2016. In 2015, her work was rewarded with the Ragazzi Award at the Bologna Children’s Book Fair. one of the most important European illustration awards, in the non fiction category for Avant Après (with Matthias Arégui). 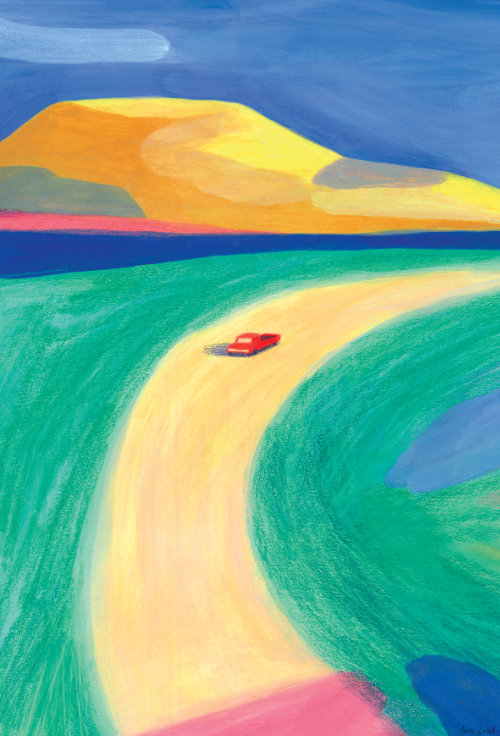 Born in 1979 in Tahiti, graduated from the School of Decorative Arts in Strasbourg in 2005, Anne Laval draws for publishing, press and communication. She works with the Rouergue, Actes Sud or Gallimard as well as with the magazines New Yorker, XXI, CUT or Télérama. Together with Violaine Leroy, she founded the association Les Rhubarbus in 2005, which organizes original collective exhibitions. His first personal album, Le Nombril du monde, was published by the Rouergue editions in October 2017.
20 poster size illustrations in 10 billboards in the street Quai des batelier. La Belle échappée is an exhibition inaugurated in November 2018 during the comic strip festival in Colomiers. It is conceived as an unforeseen detour in the city, an invitation to travel, through vast landscapes drawn with colored pencils and gouache. These illustrations, inhabited by tiny travelers, remind us that the apparent simplicity of an image also reveals details that transport us. 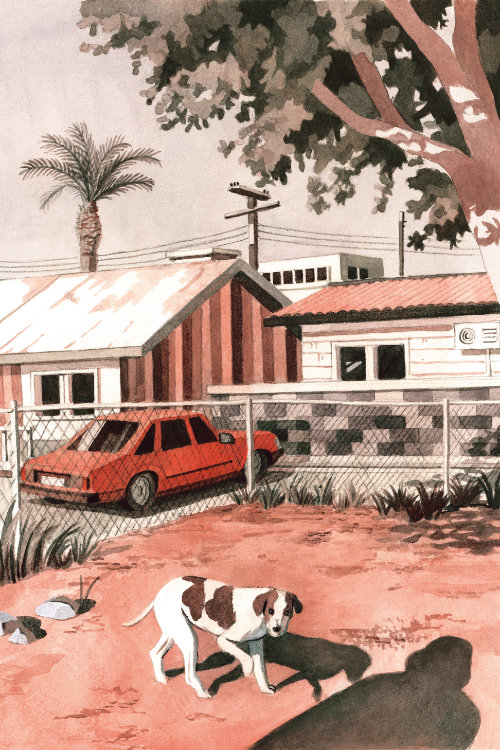 Born in 1989 in Villeneuve-Saint-George, graduated from EESI Angoulême in 2013 and HeAR in 2015, Antoine Maillard is an illustrator and author of comics. Drawn in pencil and watercolor, his drawings transport the reader in atmospheres inspired by American culture and landscapes. He has worked with Requins Marteaux, L’Agrume and the press : The New Yorker, Télérama, The New York Times, La revue dessinée and XXI.

Organized on the occasion of his return from the writing residency A Room With A View, in San Francisco (oct 2018), California Noir shows how American cinema and Californian landscapes influence the work of Antoine Maillard. the comic book Slash  Them All, published in fanzines (2012- 2017), is tributary and marked by a symptomatic atmosphere of the slasher. the exhibition presents a selection of storyboard boards and original illustrations, fanzines, as well as drawings made during the residency. 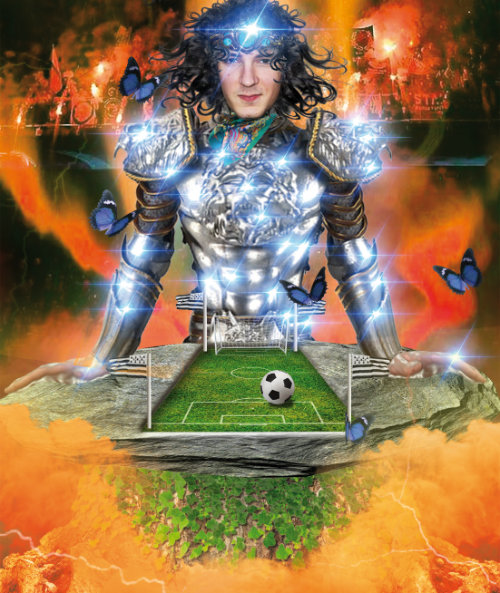 At nightfall, a great ceremony will take place and the oracles will announce the next publication of Art Majeur: The Chronicles of the Galactic Britains. Passe en Profondeur, meanwhile, will enter the field after having warmed the bench for a long time. During this great black mass of illustration, the two entities will also present their respective works. With Louka Butzbach, Paul Descamps, Thomas Simon & Elie Partouche. 10 euros before 01AM et 15 euros after 01AM.

German selector, DJ and producer, resident of the Salon des Amateurs club, she was also running the broadcast Sentimental Flashback on the label Cómeme’s radio. She released her first EP on that same label in 2015, Phantom Delia. Her sets are composite, blends of eclectic tracks: tribal techno, proto-industrial, synth-pop, EBM, etc. Lena Willikens is also the first woman to produce a compilation for Dekmantel’s Selectors.

Canadian DJ and producer, based in Berlin, Mathew Jonson is the co-founder of the label Wagon Repair, and member of the Cobblestone Jazz. He also produces on Crosstown Rebels and M-Nus. He is an atypical figure of the techno scene, as he distinguishes himself by his detours through jazz, fusion or house as well as by his lives. He recently joined the label and jam sessions Circle of Live launched by Sebastien Mullaert in 2018. 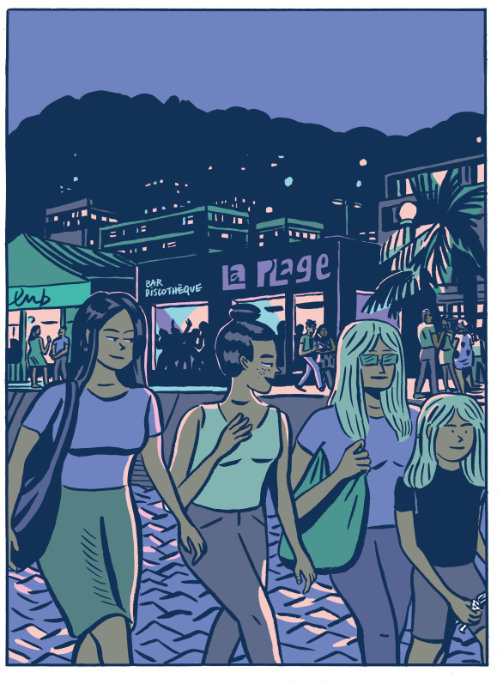 Born in 1988 in Nantes, graduated from the Estienne school in Paris in 2009 and the EESI from Angoulême in 2013, Elizabeth Holleville is an illustrator and cartoonist based in Strasbourg. She participated in the review La Corde between 2013 and 2015 and several issues of Biscoto. She is also the author of Lulu (La Corde rouge 2015) in 2015, Attentes (Fidèle, 2015) and L’Évolution de l’homme (Casterman, 2018).

The exhibition presents original comics from his comic book, L’Été Fantôme (Glénat, 2018), a story of a child’s holiday confronting the lives of grown-ups and supported by an unexpected friend. 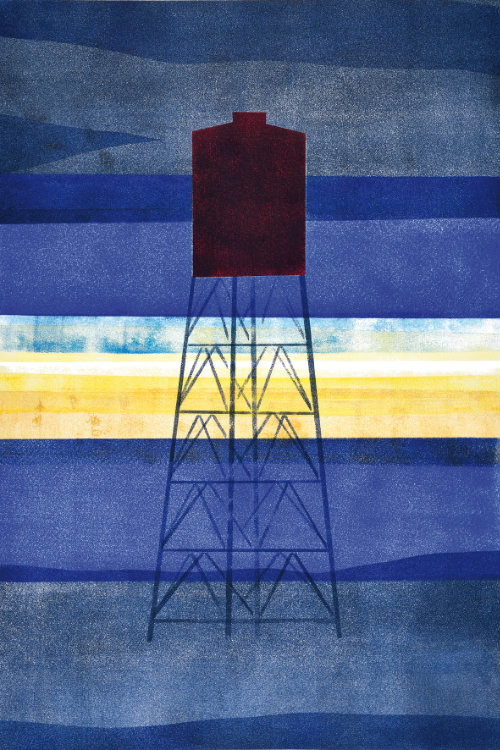 Born in 1979 in Caen, graduated from Fine Arts in her hometown in 2002 and the HEAR in Strasbourg in 2005, Marie Lallemand created scenographies: decors of carved wood, exquisite corpses statuary or assembled modules.

Her linocuts and monotypes decline different aspects of a subject – water towers, beacons at sea, pylons, mountains or icebergs. At AEDAEN, the Châteaux and Brise-Lames series of Châteaux plunge the viewer into a colorist and personal approach to mass and backlighting. 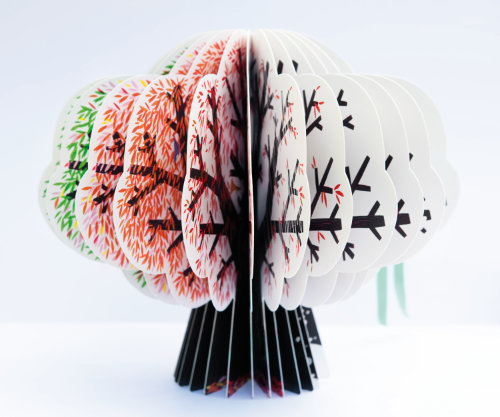 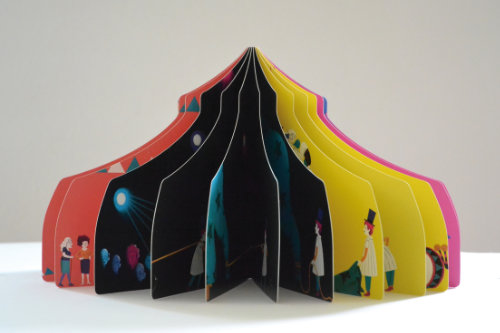 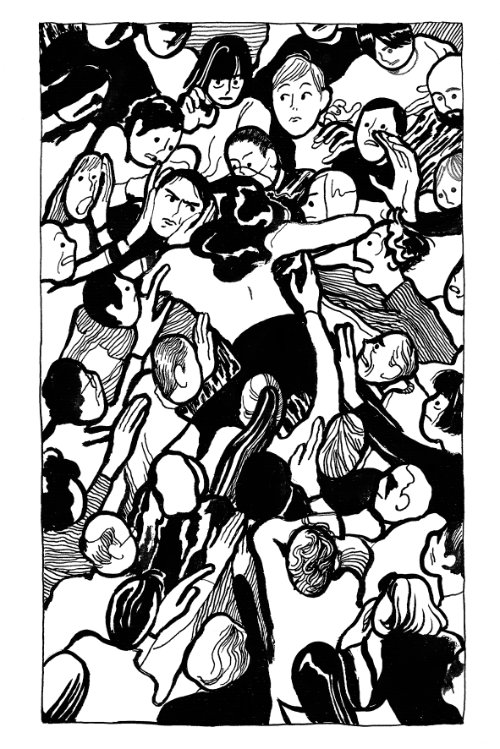 Born in 1994 in Paris, graduated from the EESI of Angoulême in 2018, Léa Murawiec is an illustrator, cartoonist and co-founder of the Flutiste collective. She has worked with Biscoto, the New Zealand fanzine Radio As Paper and Novland magazine. She is a member of Marsam, a collective of artists who have gravitated around Angoulême. With Indian ink, pen and brush, his dystopian graphic universe plays with offbeat humor so as not to get bogged down in a simply dramatic narrative. 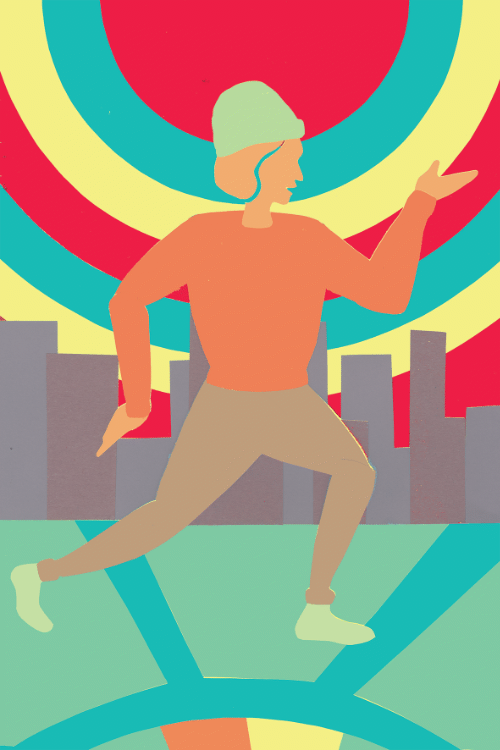 Exhibition around a collective game-book, in silkscreen, on the theme of the city. Each page is constructed by a different illustrator-trice, like a board with which to play: dartboard, culbutos, who is it, construction … The book is staged so that the public can try all games, page after page, while discovering the illustrations that compose it. 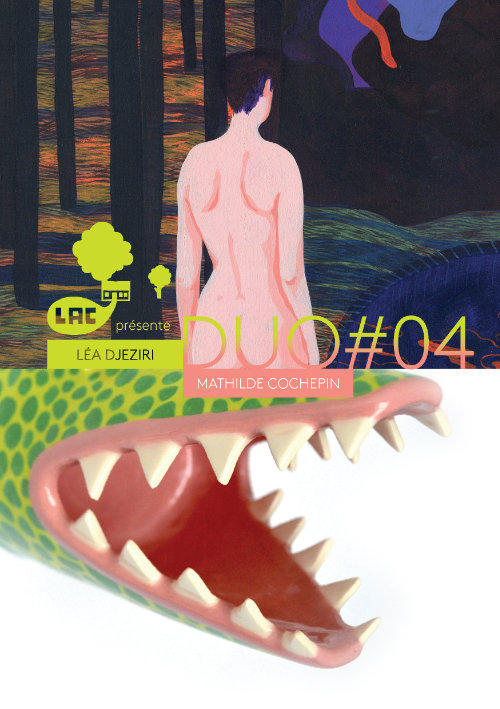 Born in 1991 in Colmar, graduated from ESAL d’Epinal (2013) and HEAR (2016). Léa Djeziri started in the youth illustration with Jasmin editions and Pourquoi pas? She has worked with several collectives including Matière Grasse and self-publishes her work under the name Part Time Drawers.

Born in 1993 in Besançon, graduated from the ESAL de Metz (2014) and the HEAR (2018), Mathilde Cochepin is an illustrator, author and ceramist. she is currently in residence Création en Cours carried by the Ateliers Médicis. 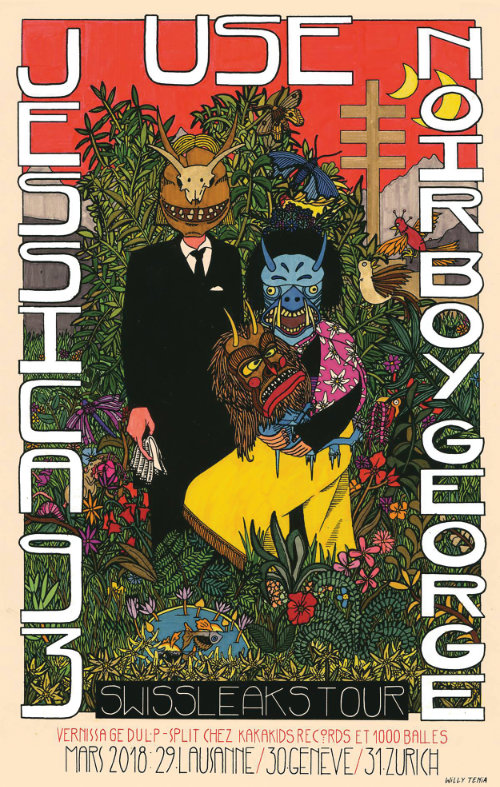 Silkscreen concert posters by Willy Ténia and other artists brought together by Kakakids. 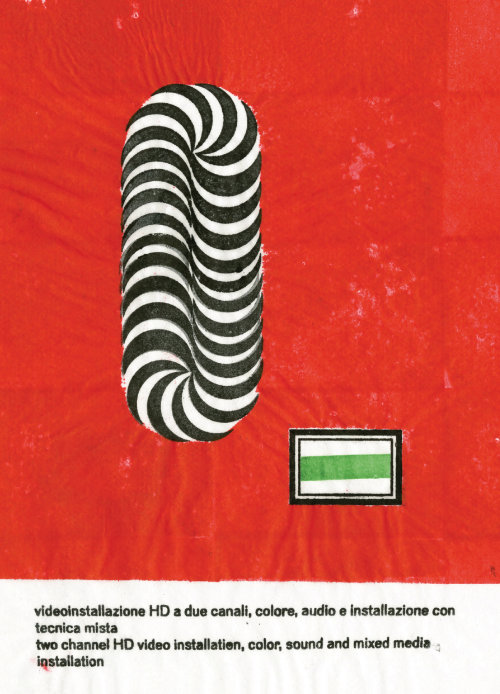 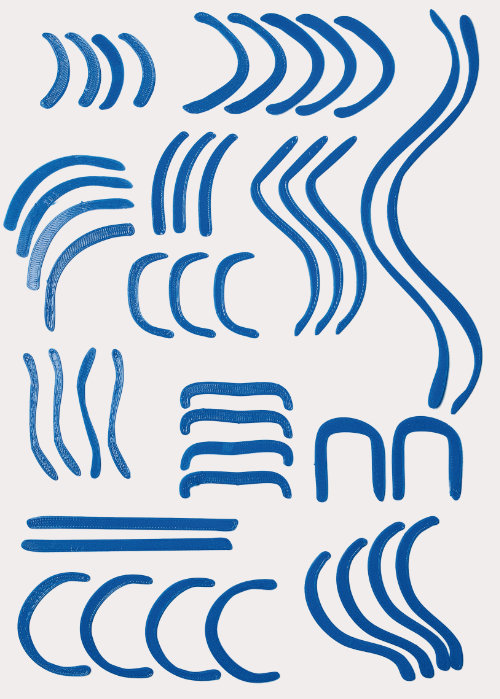 PPAF (Première pression à froid) carries the projects of the duo Adrien Chacon and Julien Molland whose productions come from the edition of artist’s books and graphic arts. The modulograph allows to draw with a minimum of forms a maximum of signs: letters, patterns, pictograms, figures … The Modulographe series of workshops, between figure and writing offers students of think about modular drawing tools, make them and expose the process in the gallery space. 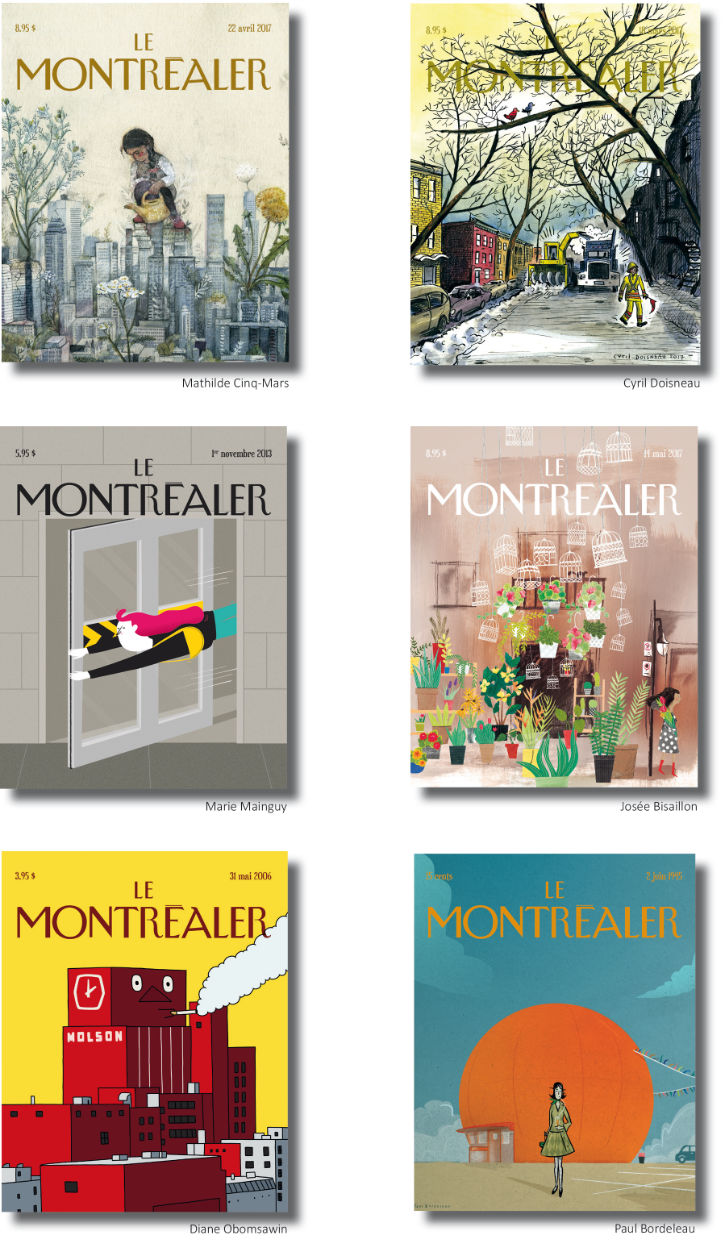 52 illustrators, comic book authors and visual artists as well as 10 authors propose their vision, their interpretation and their look on the metropolis to make you travel. In tribute to the famous covers of The New Yorker magazine, and on the model of The Parisianer, these creations present Montreal. In parallel to the exhibition, the media library will present a range of books to learn more about the city as well as to discover the work of participating artists.