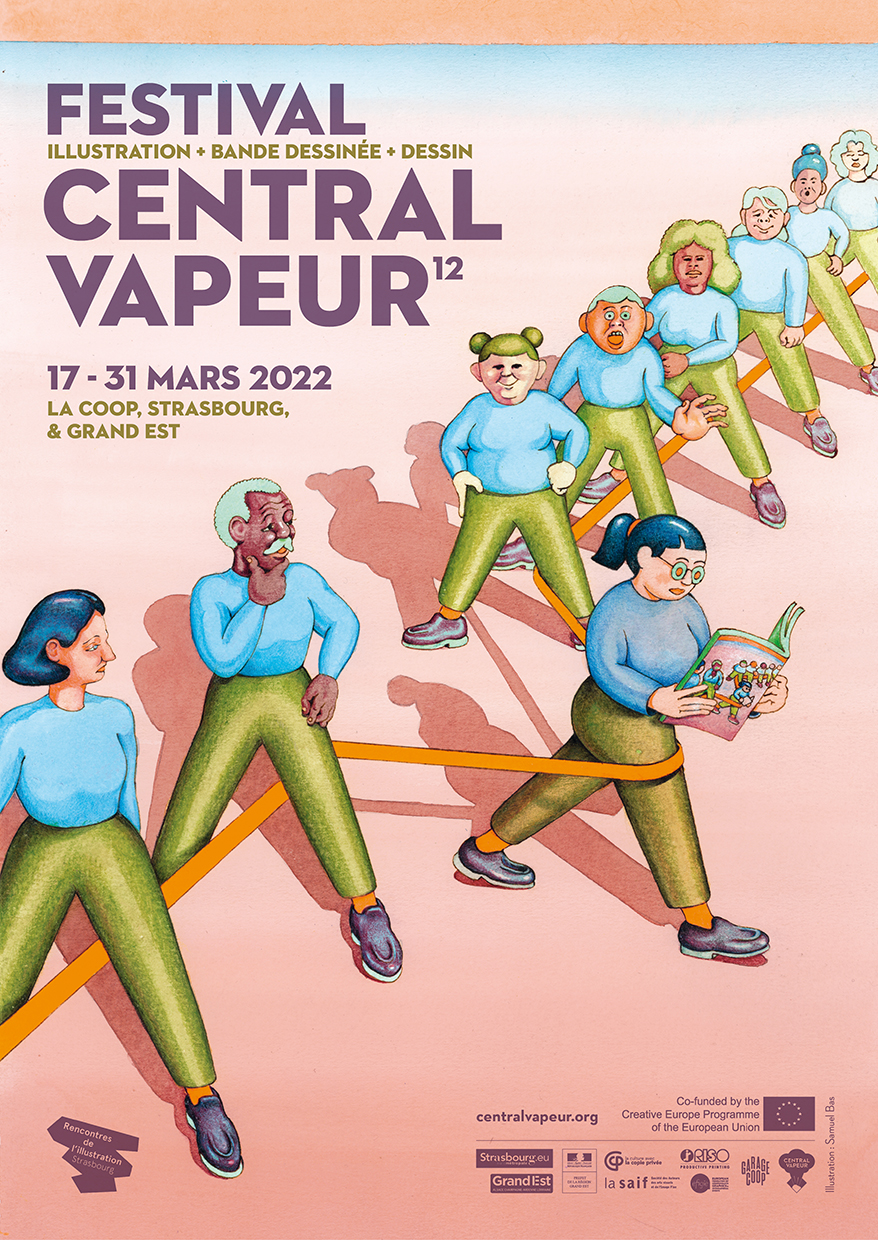 The Central Vapeur festival plays for the first time at home with its book fair and two European exhibitions at the Coop, less than a kilometer from Germany. A program that extends throughout Strasbourg, the Grand Est and as far as Basel.

Last exhibition of the Europe Creative Invisible Lines project, Borders is the penultimate stage of a European tour that associates 12 young creators from 7 countries and their mentors between Venice, the Sudetenland, Strasbourg, Tabor (CZ) and Bologna. His black and white prints will cohabit with the color originals of the 24h of illustration. Borders brings together young Europeans, illustrators from Strasbourg and refugees who have shared their stories of borders. These lines of demarcation, often invisible, are freed from reality with the micronations invented by 40 illustrators on kakemonos to be seen in the streets of Strasbourg during the opening ceremony on Thursday. We will find them during the fair the last weekend hosted by Garage Coop and the CRIC.

See also in french Rencontres de l’Illustration de Strasbourg with our partners ; the Médiathèques of the  City of Strasbourg Eurométropole,  Strasbourg Museums, the Haute École des Arts du Rhin and the 5e Lieu.

Independent publishing comes in the form of SMEs, associations, micro or self-publishing collectives. Whether it takes a vow of rigor or devotes itself to chaos, it constitutes in Alsace, in France and elsewhere, a privileged space of creative freedom. Children’s books, abstract drawings, delicate objects, silk-screened posters, comic book fanzines or publications not to be put in just any hands, all the trends of independent graphic arts publishing are represented. We have chosen our guests with care: come and meet them
and discover their creations on the show!

Admission to the fair is free.

If you wish to buy books, posters, or other unidentified printed objects, you will not always be able to do so by credit card. We therefore advise you to bring your checkbook and/or cash. If you don’t want to buy anything, that doesn’t prevent you from browsing, reading, asking questions, or participating in meetings and workshops.

Each publisher or collective present will donate one of its editions to make up a prize basket whose weight you will have to guess.
Place your bets at the reception desk of the Fair!

(the absent ones will always be wrong).

You will find food and drink at the entrance of the lounge: coffee, tea, softs, wine, beer, knacks, pretzels and cakes.

Opening hours of the refreshment stand :

Take part in our contest of cakes, cakes and other mignardises, sold at the bar to support the association Central Vapeur.
The PAPIER GÂCHETTE & PROJETA collectives, jury of this 5th edition, will award prizes according to several criteria (top good, top beautiful, top original and top of the top). To win: editions, surprises and of course, the eternal class.

Award ceremony for the illustration contest in partnership with METEOR, this year on the theme “beyond borders”. The contest is open to adults of all nationalities. The first prize of 1 000 € is printed on 5 000 coasters by the Alsatian independent brewery.

You couldn’t be famous last year… (well yes, since the Festival was cancelled) but you may have found the recipe to be famous this year? Bring your strawberry, your cake, your pie, your mignardise or your cake, to finally get on the podium.

Who will have the right weight? To win the basket, go estimate it at the entrance!

TRES TRES BIEN
The members of the collectif Très Très Bien invite you to make small comic book fanzines in octavo format with the means at hand. An ancestral technique known by all fanzine lovers! Come and learn the art of comics to make very, very nice books. Free price.

CENTRAL VAPEUR’S VOLUNTEER ILLUSTRATORS
Have you always wanted to get a tattoo, but never dared? Your dream can come true! Illustrators will draw on you live, with a marker that respects your skin. Free price.

PAPIER GÂCHETTE
Letterpresses and a press are waiting for you to print posters with your favorite song punchlines! From 9 years old. Free price.