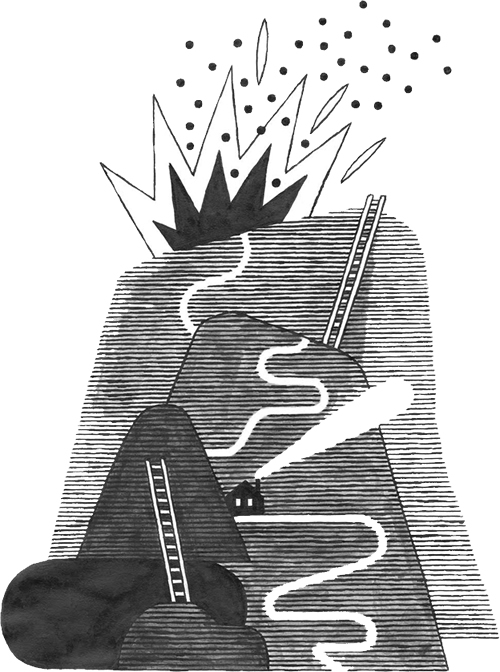 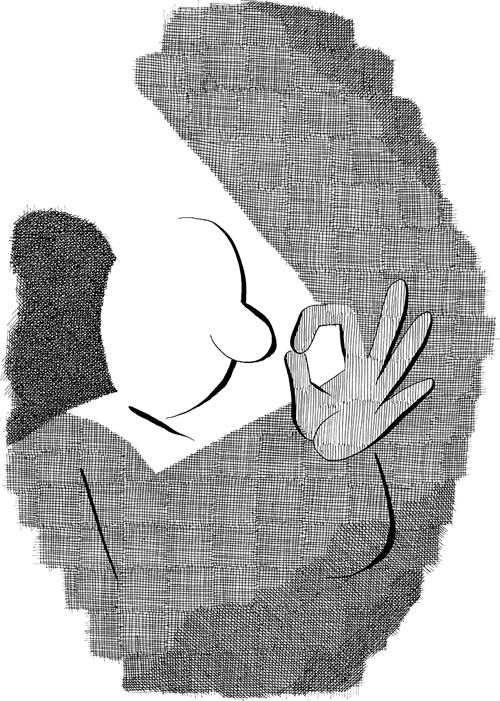 One of them covers the sheet of paper with a multitude of different objects, characters and details that he describes in their most simplest form, piecing them together to make charts of pictograms. The other artist with the his dash of his paintbrush evokes figures and fractured objects, as if masked by their own reversed image or hidden behind a fine artboard grid. By the way in which they think out and express themselves through the drawing, jochen Gerner and Guillaume Chauchat share several points in common. They have been sending their work back and forth through the post, the drawings they receive from each other are the starting points for their own response, a dialogue is established. During the exchange, certain elements in the work allow the artists to inject something of their personal universe into the drawing of the other: the dialogue becomes a face to face conversation, with the other and oneself. By ensuring that each drawing can viewed alone or as part of a series, the artists invite you to imagine new meanings and associations from this record.
— espace-k.com
JOCHEN GERNER
Born in 1970, Nancy where he graduated from the Ecole Supérieure des Beaux-Arts in 1993. Jochen Gerner works as an illustrator for the press and as a comic book artist. Member of OuBaPo he is published by l’Association and Rouergue, he is a regular contributor to both the national and international press, such as Le Monde and the New York Times. Jochen Gerner is represented by the gallery Anne Barrault, Paris. In 2016 he received the Drawing Now award at the salon of Contemporary Drawing.
— jochengerner.com
GUILLAUME CHAUCHAT
Born in 1980, Paris he spent his childhood between France, USA and Hungary. Guillaume Chauchat studied at HEAR, Strasbourg where he cofounded the Belles Illustrations review with 8 friends in his year. Since graduating in 2009, he works as an illustrator and comic books artist, as a visiting lecturer at HEAR and as a sculptor. He also works for the press, notably XXI, Le Monde, Libération and the New York Times. In 2010, he was awarded the prize for Young Talent at the Angouleme Comic Book Festival.
— guillaumechauchat.com 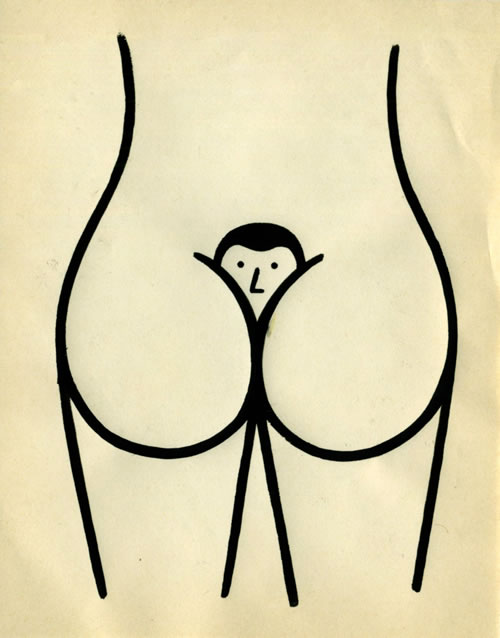 A graduate from HEAR in 2007, he works as a children’s book illustrator and has been published most notably by Hélium, Rouergue, Actes Sud Junior and Gallimard Jeunesse. He also works for the press (XXI, New York Times…) designs posters, and as the drummer in the pot-rock group Slaap. He will be exhibiting over 50 artworks selected from the series of small gouaches Sur des Roulettes and 11 x 14; four screen prints that capture his skaters soul through an off-beat take on potential skate spots. 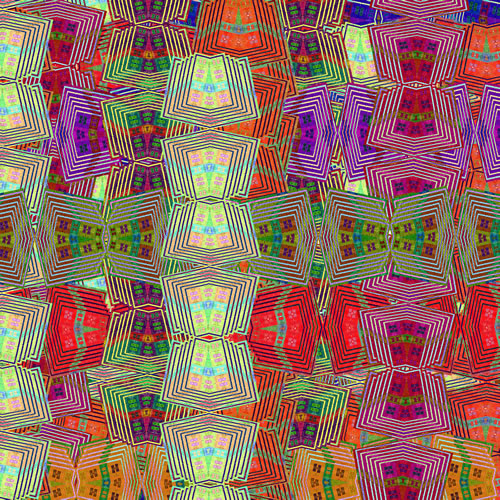 Born in 1978, Nancy and graduate of the Ecole des Beaux-Arts de Mulhouse, Jeanne Bischoff lives and works in Strasbourg, where she has developed a most personal drawing style, between abstract illustration and embroidery. Fascinated by the finely detailed engravings in the 19th c review La Mode Illustrée (published between 1860 and 1932), she select certain parts of the image that she then cuts out, colours and combines, as if a scientist had swopped his microscope for a kaleidoscope. This experimental protocol leaves her free to draw landscapes made up of coral, human organs and strange maritime flora. Jeanne Bischoff’s books follow the trail of shapes and colours that she drops behind her as she continues her graphic journey. 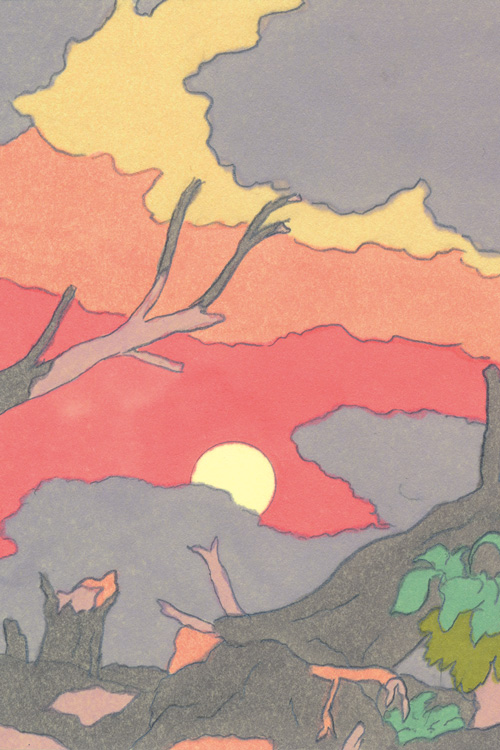 There is little to say about the life of Dans Le Ciel Tout Va Bien as his anonymity is part of his artistic approach. However, he is interested by photography, music and literature and that through drawing he has developed his own personal and simple visual language. As an active participant in the independent publishing scene he has been involved in the organisation of the Fanzines! festival, Paris in recent years and he regularly publishes his own books which he sees as an ongoing exploration running parallel to his illustrating. Since 2011, Daniel Tout Va Bien has started a series of pencil and felt-tip drawings on Post- Its that appear both on social media and in print. 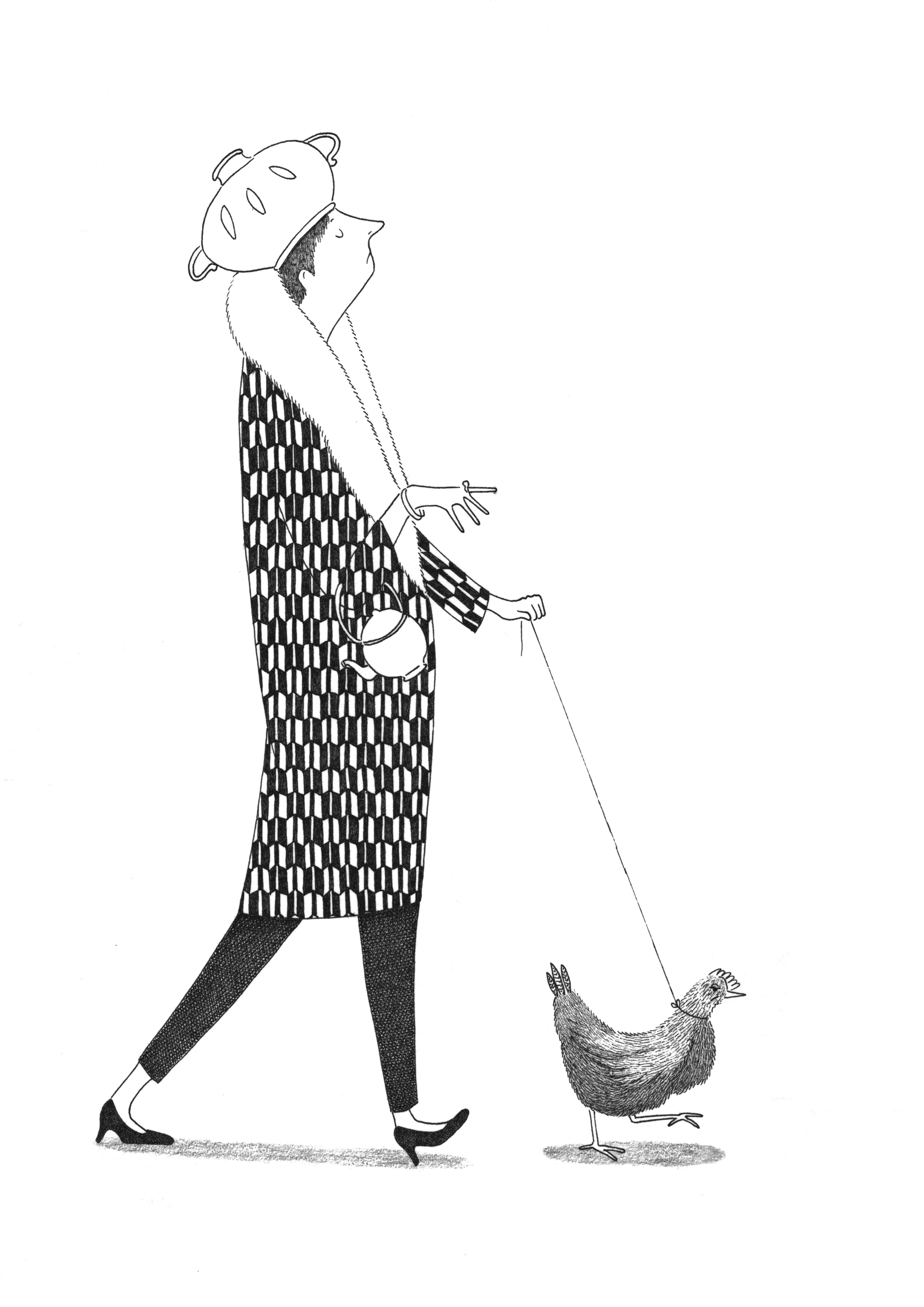 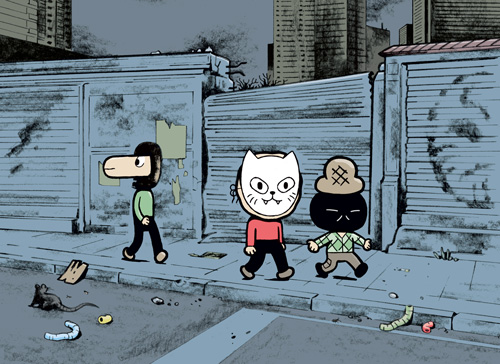 The exhibition coincides with the publication of En Chine in French (published by Atrabile) end In The
Museum (published by Delcourt). On display will be the original artwork, and reproductions in german
and french, selected from his recent books: Insekt (Sarbacane, 2007), Quatre Yeux (Atrabile, 2013) and Dri Chinisin (L’Association, 2013).
IN PARTNERSHIP WITH THE GOETHE-INSTITUT AND LES BIBLIOTHEQUES DE L’UNIVERSITE DE STRASBOURG. 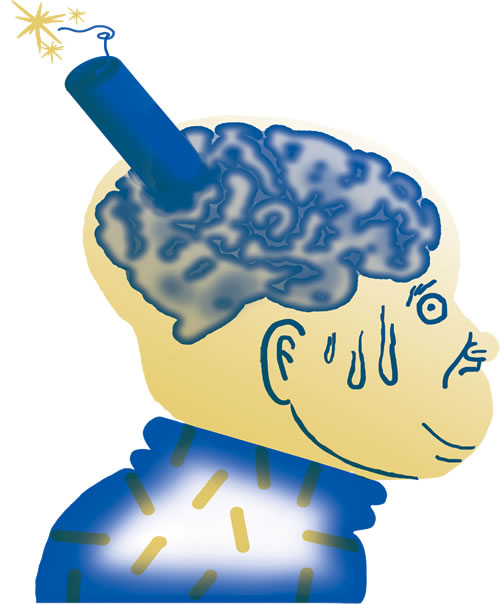 Accompanying the launch of the latest issue of the review the exhibition presents posters on the theme
of election posters in a representational democracy. Novland, the illustrated review published by recent
graduates from HEAR takes a more broader look at the current state of politics. 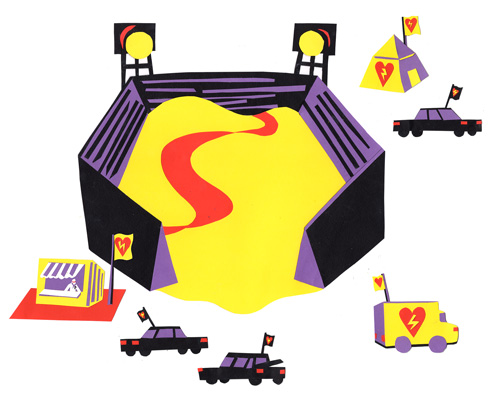 FROM 1st MARCH TO 1st APRIL (except Sun)

L’Amour éditions bring together twelve young creatives showing a variety of different projects,
illustration, printmaking and multimedia. The collective is based in Strasbourg, Paris, Bruxelles,
Angoulême and the rest of the world. On the occasion of the release of their third title, Olympic Games,
L’Amour emerges from the shadows. From its origins in antiquity to the modern aesthetic of this international event, combining flags, crowds, stadiums, sweating bodies, butterflies in the stomach and
glorifying games, this over-sized universe, fascinating or ridiculous, has inspired the production of a
richly colourful edition. Trophies, orignal artwork, screen-printed flags, and limited editions will be on
show. 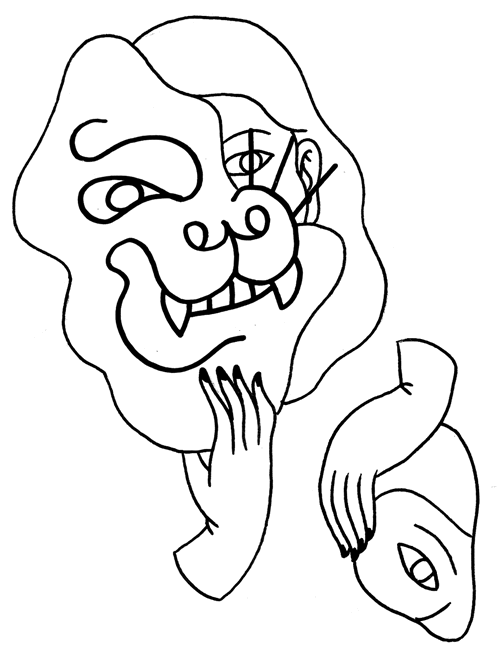 Through their use of a vocabulary made up of basic symbols Amina et Point36 join forces to make this
collection of images. They seek their inspiration at its source, in Wuxing the 5 main elements in chinese
cosmology. Wood, metal, water, earth and fire silently take shape. As keen tattooers they are offering to
needle a series of their drawings on interested visitors to the exhibition (on appointment only). Amina
Bouajila, illustrator living and working in Strasbourg for different reviews and collaborates with Matière
Grasse éditions on their hand-printed projets.
appointments can be made here socopof@centralvapeur.org 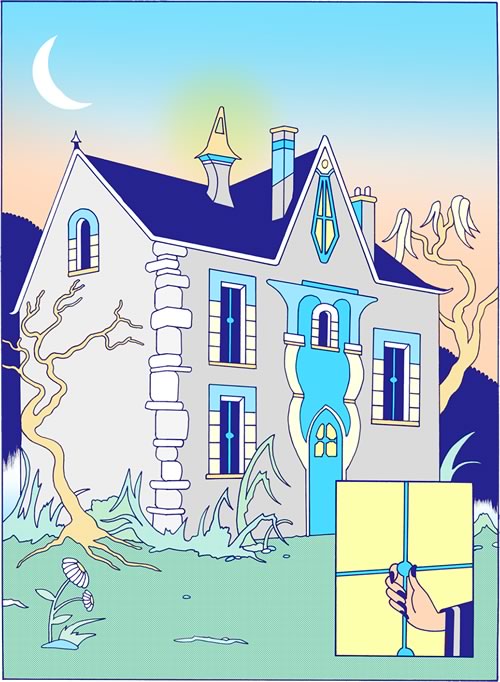 Four years after the review’s creation it is time to look back whilst issue number 4 of this graphic arts
review is in production. Les Ombres will be showing their personal selection from the past four years of
their graphic experimenting with the printed object, via original drawings and various prints, in one of
chic Strasbourg’s most underground venues.

FROM 29th MARCH TO 2nd APRIL 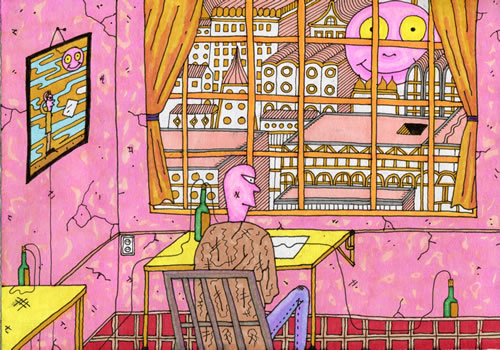 FROM 23rd MARCH TO 1st APRIL